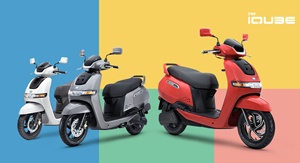 Images of the hydrogen fuel cell scooter, an adaptation of its recently launched iQube e-scooter, show that the company has nearly completed development of the prototype.

Leaked images of the prototype show that the chassis downtube at the front contains the canisters that store hydrogen gas. The canisters are connected to the hydrogen fuel cells stacked under the seat via dedicated hoses that are routed under the floor. There’s also a regular battery, probably a lithium-ion unit, under the floor for emergency needs.

The battery pack will be charged by regenerative braking and/or by excess electricity produced by the fuel cells. Nearly all of the components, including the pressure regulator, flow meter and shut-off valve are in place, showing that the company is nearing completion of prototype manufacturing.

The patent image of the scooter does not show a motor, showing the possibility of a hub motor.

The exterior closely resembles that of the current iQube, while the parts are laid out in a simple fashion with an emphasis on ease of maintenance.

Once launched, the hydrogen fuel cell scooter will eliminate the need for recharging as the hydrogen filled in the canisters will help generate the electricity needed to run the scooter.

When hydrogen comes into contact with the anode, a catalyst splits its protons and electrons. The electrolyte only allows protons to pass through it to reach the cathode.

Thus electrons are forced to pass through the outer wire to reach the cathode which are then trapped as electricity and transferred to the controller and motor.

When protons and electrons reach the cathode, hydrogen and oxygen react to form water vapor which is emitted as exhaust gas. Once this technology is perfected, battery electric vehicle technologies will be overtaken.