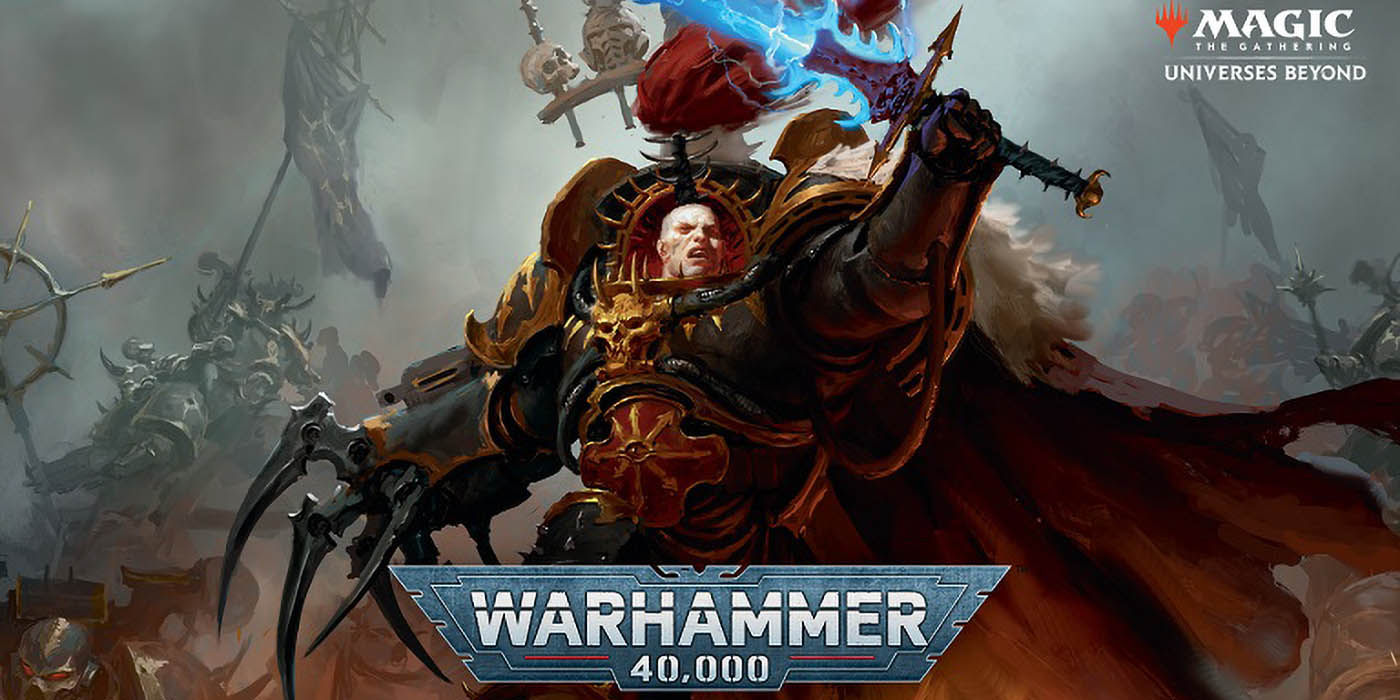 MTG’s Universes Beyond boosts the color wheel with these awesome new cards that all 40K players will love!

The new Universes Beyond Commander Decks have been fully revealed and are full of powerful reprints. However, the all-new cards are the most exciting part of any new deck; these decks don’t neglect either.

Whether fitting into an existing 99 or serving as a springboard for a new concept, original cards are always a welcome addition to any collection. The Grimdark universe certainly does not disappoint and has delivered powerful new parts for every color of the MTG wheel. Here are five of our favorite cards from the new Commander rotation, one for each color.

At first glance, this is a fairly standard white damage piece at 4/4 with First Strike for 4W. However, this second ability is where these puppies really shine. Allowing you to put a +1/+1 counter on EACH OTHER creature you control whenever it passes through to deal combat damage. Since it sits firmly in a set of Esper tokens and the blue and black companion colors have no shortage of ways to increase evasion, it’s not a tall order and will take a board from weenie to winner in no time. But even outside of the Imperium deck, a big beater that also buffs your board is an easy item to include. I’ll probably put one in my Gluntch counter deck.

Of the five colors, blue is the most underrepresented in new decks with only 11 cards. However, that doesn’t mean it doesn’t empower us, like that subtle copy king, the Genestealer Patriarch. Whenever this monster attacks (attack only, no damage), you may put an infect counter on 1 of your opponent’s creatures. Although they don’t do anything right away, when one of the infected creatures dies, you get a copy that also gains the Tyranid type. Blue doesn’t have much shrinkage on its own. But combine it with any of the other four and you’ll have access to some easy creature killers. Soon your opponents will be looking at their own board. But their creatures will bolster yours with cards like Blazon or Icon of Ancestry. Definitely a piece to consider in a Sakashima or Orvar deck.

On the other side of the rep piece, black has carved out the lion’s share with dedicated play and a place in the other three (although blue is in three of them, most of its representation is multicolored). Although there are several contenders for the best card of this color, the biotransfer blows them all away. Turning all creatures on or off the battlefield into artifacts AND getting a token effect every time you play one is powerful enough on its own. However, combining that with all the artifact recursion that already exists and all the new pieces in the game makes it a powerhouse. Cards like Glissa the Traitor, Breya, and Sydri will love having all your creatures have a metal coat, and you’ll immediately see the benefits.

This one is another dormant card that looks average on the surface but can become an absolute bomb under the right circumstances. First, the Ravenous ability lets you draw cards, which is rare in red, without casting other cards. Second, it can become a huge beater if you have the mana, but what you really want is the Barrage effect. When it appears on the battlefield, whatever extra mana you put into it goes straight into the faces of everything else on the board. If you’ve saved up enough, you can finish the game in one cannon shot and still have a massive creature on the board while your opponents scramble with scraps.

This one should go without saying, but I’m going to say it anyway; it’s possibly the best card in the game to plug into other 99s. Getting four +1/+1 counters just to attack is bad enough, and it makes your threats dangerous before they even deal damage . Combine that with an effect like Hardened Scales, Doubling Season, or the almighty Vorinclex, and you’ll quickly have creatures out of control. The best part is that since it’s gear, it doesn’t die when your creature does it, and if you need to upgrade something else, you can just move it around. At 3 mana, this card is crazy, and I wouldn’t be surprised if it becomes a staple in the future.

What are your favorite cards from the set?

Hailing from North Carolina, Clint arrives in Austin as the latest in a long list of wandering actor haunts. An avid gamer, writer, actor, pyrotechnician, and general nerd, he writes two weekly Age of Sigmar articles for Bell of Lost Souls from a slightly sub-meta angle, as well as a weekly tournament roundup. When he’s not busy being a clueless cowboy, Winterfell Bannermen, or whatever acting life throws at him, he enjoys reading folklore from around the world, writing tales for his Wargaming armies, or watching all the movies he can. Look for his storytelling podcast, By the Dancing Fire, or find him on Twitch at RedWendigo13.