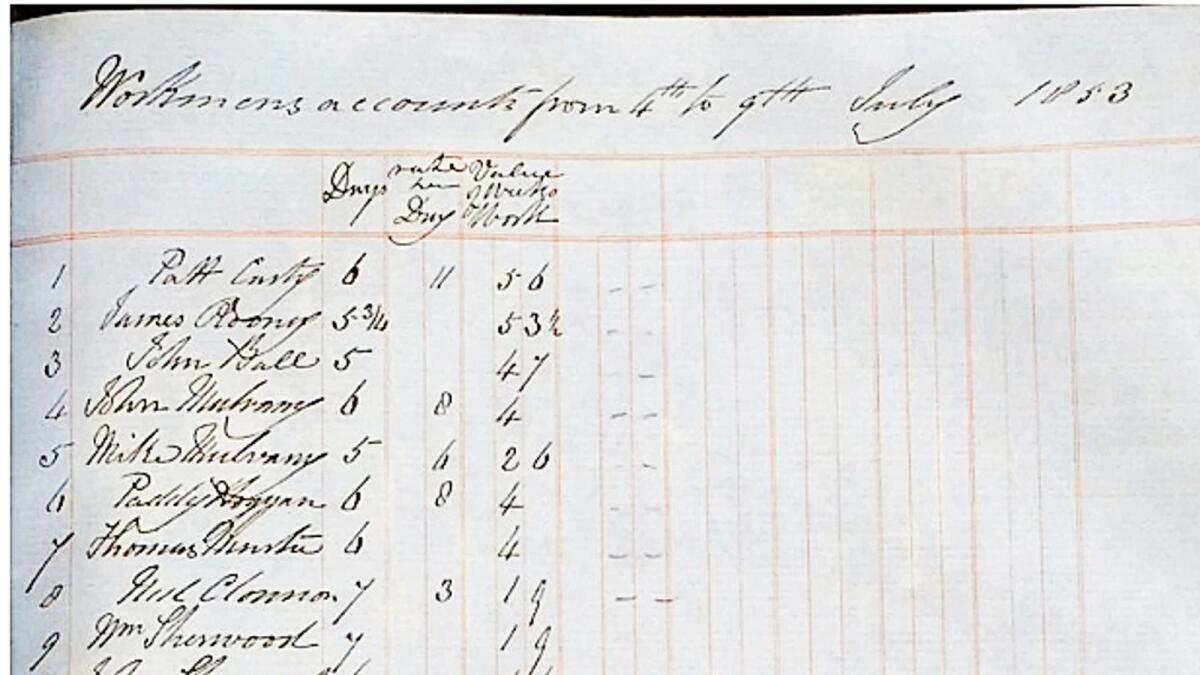 Maps predating the earliest Ordnance Survey maps of this region; rent books dating back over 200 years and wages books from the mid 1800s are just some of the irreplaceable artefacts contained in the hundreds of boxes of papers and registers stored in the records room at Tullynally Castle .

It is not surprising that there are such quantities of documentary material. Pakenham’s estates were vast, covering tracts of territory around Castlepollard and Killucan, as well as across Longford. The family also owned property in Dun Laoghaire.

As a result, there are untold treasures that will help genealogists and social historians in their research, believes Eliza Pakenham, whose family has lived in Tullynally for 370 years.

The digitization process began three years ago, and last month county Longford and Westmeath libraries opened access to what is called ‘The Pakenham Papers’.

“So there are basically three categories of things that have been digitized,” says Eliza.

“The first would be rentals that date back to the very beginning of the 19th century and come in the form of annuity books.

“They start around 1815, but most date from around the middle of the 19th century and they formalize rental contracts and leases with private individuals until the beginning of the 20th century; in some cases, we see the same families renewing their leases over generations.

“The second category would be payroll records.

“The third category would be maps, which are actually in some ways the most interesting, as some of them predate the Ordnance Survey, with the first Ordnance Survey being published in 1842.”

“It gives you a real sense of local history here,” says Eliza.

Researchers will be delighted to learn that the maps digitized to date represent, Eliza reveals, “only the tip of the iceberg”.

“We’re actually working on seeing if we can digitize some more because they’re huge and it’s very difficult to roll them out – without damaging them – to weigh them down and then photograph them. But it has to be done because they have been sitting in the archive room for many decades waiting for someone to study them.

Eliza considers the process of digitization to be invaluable – not only because it facilitates better access, but also because it is a means of preserving and safeguarding items that might disintegrate over time or that could be lost forever to another disaster.

“I’m so glad this has been done, because it means that at least the material that is of great interest to the public is now in digital form and preserved.”

The digitized documents and the maps are not available online, but anyone wishing to consult them can approach the library to consult the material, and the consultation is done in the library.

A writer whose work has involved a lot of historical research, Eliza says she understands this won’t suit all scholars: “We want to make things easier for people, and accessibility is key. So for people who can’t get to those libraries, like bona fide researchers who may be in Australia or America – because I get a lot of requests from those two places – there might be in the future a way to allow access in a sort of regimented manner. But we cannot just release it into the ether.

The material digitized to date represents only a fraction of the archive, and it is thanks to the insight of Eliza’s father, Thomas Pakenham, who rescued boxes and other boxes of material from other areas. which were otherwise destined for dumpster when the land company agents formally known as Stewart and Kincaid went out of business in the early 1970s and began to divest itself of its records, including those of the Pakenham Estates.

“I’m very aware of how lucky we are to have the records, but the flip side is that it’s a big responsibility. And you know, we had a flood a few years ago. Luckily it was at the other end of the archive room and didn’t affect the papers, but every artifact – and there are hundreds of them – had to be moved and the whole room restored, then everything was put back in place. And while you are carrying these things, you are aware that you are holding things in your hands that are irreplaceable.

Eliza hopes that over time more of the material will be digitised, and she paid tribute to Westmeath Heritage Manager Melanie McQuade and County Longford Archivist Martin Morris for their work hard work and perseverance that brought about the project. as far.

Longford County Council and the Longford County Historical Society are due to launch the Pakenham Papers Digitization Project at Longford Library at 7.30pm on Wednesday September 14. The event had to be canceled last month, and all are welcome to attend. The Pakenham Papers Digitization Project involves documents dating back over 400 years of Longford Town’s history. Their digitization enables these historically significant documents to be made available to the public in the County Longford Library and Archives departments. Part of the Pakenham family archives, the records include historic leases, rent books and the records of the Longford Borough Corporation. The County Longford Historical Society completed the Pakenham Papers Digitization Project at the end of last year. The society agreed that the footage from the archive would be made available to the public at Longford County Council’s Library and Archives Services. For more information see Longfordlibrary.ie or follow Longford Heritage and Archives on social media.